Development of a radiopharmaceutical for joint treatment

One of the radiotherapy methods, radiosynovectomy (radiosynoviorthese, radioinoviolysis, isotope synovectomy, abbreviated to RSO), was described in the 1950s as a method for treatment of rheumatoid arthritis and other types of arthritis. The first report was published in 1952 by Fellinger and Schmid. The effectiveness of radiosynovectomy is due to the action of β-emitting radionuclide on the intraarticular membrane and depends on the joint type and the process localization. When the radiopharmaceutical, associated with a non-diffusing colloid of 1-20 microns in size, is administered inside the joint, the radionuclide remains in the synovial fluid and then is phagocytosed by macrophages of the synovial membrane, with local radiation exposure. Irradiation of the target cells of the synovial membrane initially stops the inflammatory response and eventually leads to regression of synovial proliferation followed by its fibrous densification. As a result, there is a decrease in inflammation in the joint and, as a consequence, suppression of pain, which allows to preserve the function of the damaged joint. 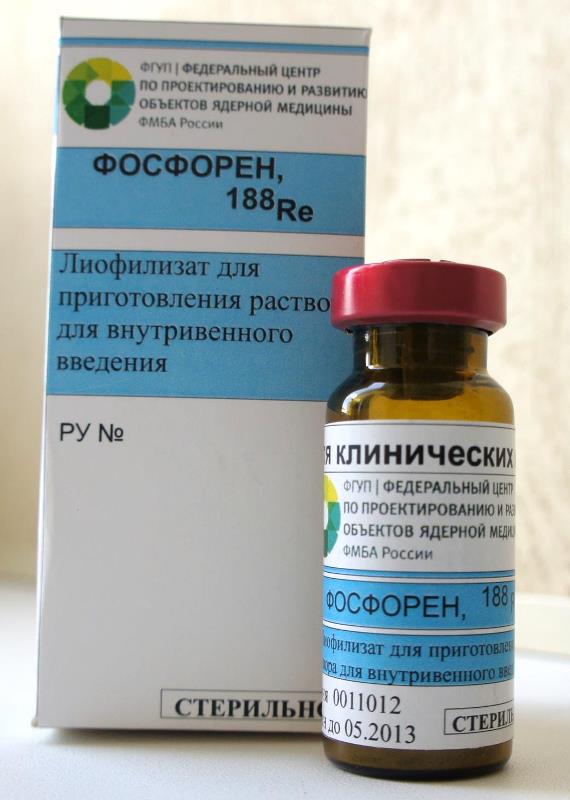 One of the serious and dangerous complications of oncological diseases of different localization, despite modern antitumor therapy, is the development of bone metastases. Bone metastases are the cause of severe pain, increasing with the progression of the disease and leading to a sharp decline in the quality of life of patients and reducing their survival.

The most promising method of treatment of skeletal metastases is radionuclide therapy. In this case, it is possible to administer highly absorbed doses directly in pathological foci, while irradiation of healthy organs and tissues is minimal.

The new radiopharmaceutical “Phosphorene, 188Re” is a mono-potassium salt of 1-hydroxyethyldenediphosphonic acid, labelled with the radioisotope rhenium-188. This compound has the ability to predominantly accumulate in bone tissue. In the foci of increased metabolism of bone tissue, hyperfixation of the preparation is distinguished, which determines its analgesic effect due to the physical characteristics of rhenium-188.

At the moment “Phosphorene, 188Re” is at the final stage of registration in the Ministry of Health of the Russian Federation. The introduction of this radiopharmaceutical into clinical practice will allow providing domestic medicine with a new, more affordable, effective and safe radiopharmaceutical for the therapy of cancer patients with metastatic skeletal lesions. 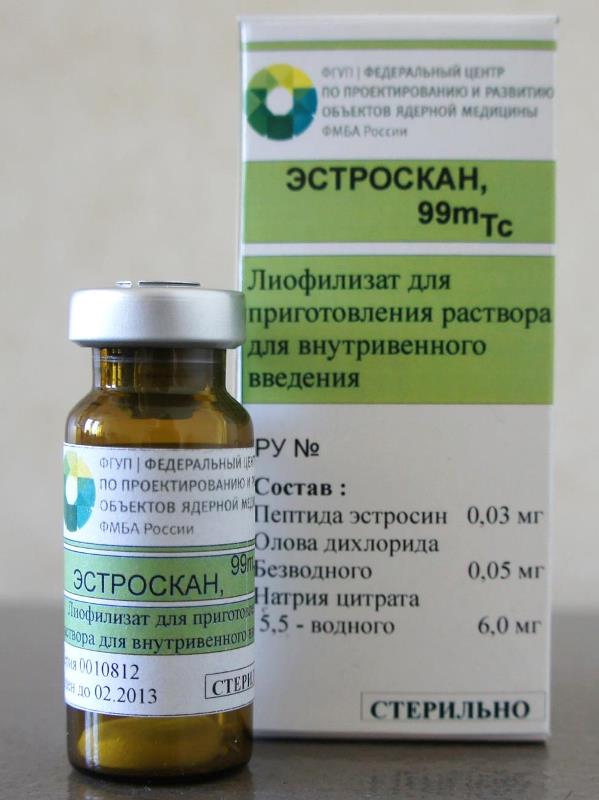 Estrogen-sensitive cancerous tumors occupy the main place in the structure of cancer in women. The main ones are breast cancer, ovarian cancer and uterine body cancer (relapsing hyperplastic process of endometrium).

There is no doubt that earlier detection of breast cancer and ovarian cancer and, accordingly, removal of the tumor is the most acceptable tactic for this disease treatment. It is known that scintigraphy with diagnostic radiopharmaceutical medications performed in addition to mammography and other interventional diagnostic methods significantly reduces the number of false-positive and false-negative results. However, nowadays in medical practice there are no any radiopharmaceuticals for diagnosis of primary foci, progression and metastases of estrogen-dependent tumors. One of the promising innovative directions is the creation and introduction into clinical practice of diagnostic radioisotope preparations, the main carrier (vector) in which are peptides capable of binding with active receptors of hyperproliferative cells.

The innovative radiopharmaceutical preparation “Estroscan, 99mTc”, which is a technetium-99m labelled peptide analogue of the active fragment of alpha-fetoprotein, can be used for the diagnosis and staging of estrogen-dependent tumors, in particular breast cancer and ovarian cancer. Now the preparation passes the stage of clinical studies, the results of which indicate that the preparation “Estroscan, 99mTc” demonstrates high diagnostic efficiency and a serious potential for the visualization of estrogen-sensitive space-occupying lesions of breast and ovaries. It is especially important to note the high social significance of the results of the conducted studies. The developed preparation “Estroscan, 99mTc”, being the first domestic preparation intended for minimally invasive diagnosis of estrogen-sensitive tumors constituting up to 60% of all tumors of the reproductive system in women, is recommended for further research and registration as a diagnostic tool for its introduction into clinical practice.

In 2009, FSUE Federal center of nuclear medicine projects design and development of FMBA of Russia began to implement R&D: “Generic design of PET center”, the customer of which was the State Atomic Energy Corporation ROSATOM. Within the framework of R&D, the design documentation was developed, including scientific evidence for the selected solutions and description of the subsequent engineering support for the newly opened PET centers.

In 2011 the Research Department employees of FSUE Federal center of nuclear medicine projects design and development of FMBA of Russia embarked upon development of an extraction unit for production sodium/technetium-99m pertechnetate to the order of A.I. Alikhanian National Science Laboratory (Yerevan Physics Institute). The works were performed with support from the International Science and Technology Center.